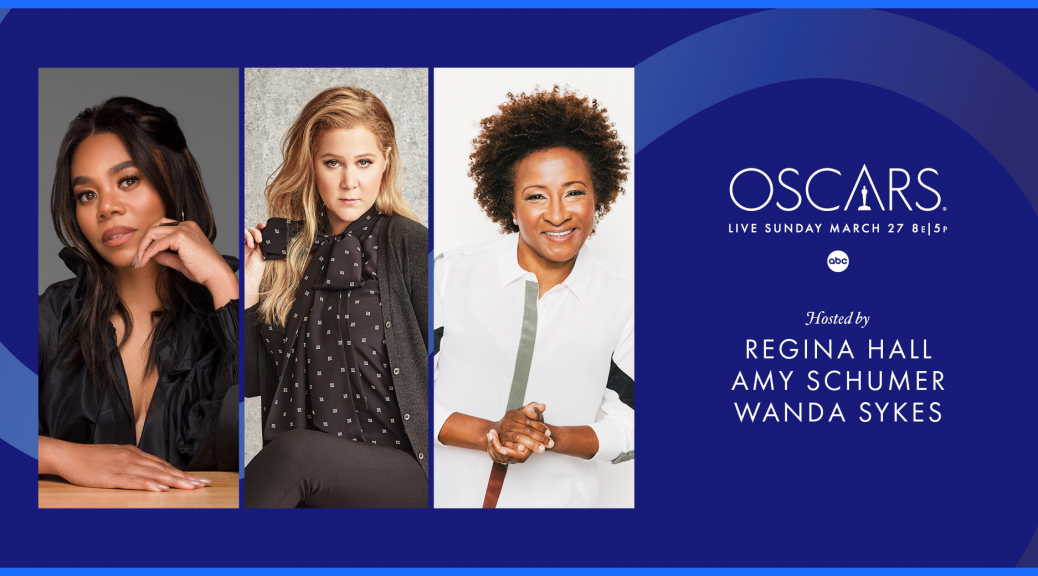 “Imagine having one of the funniest women in comedy today hosting the Oscars… Now, multiply that by three,” said Craig Erwich, president, Hulu Originals and ABC Entertainment.

Los Angeles, Calif. – Comedians Regina Hall, Amy Schumer and Wanda Sykes will host the 94th Oscars®, show producer Will Packer announced today.  This will be the first time hosting the ceremony for each of them.  The Oscars will air live on ABC and broadcast outlets worldwide on Sunday, March 27, 2022, at 8 p.m. ET/5 p.m. PT.

“This year’s show is all about uniting movie lovers.  It’s apropos that we’ve lined up three of the most dynamic, hilarious women with very different comedic styles,” said Packer.  “I know the fun Regina, Amy and Wanda will be having will translate to our audience as well.  Many surprises in store!  Expect the unexpected!”

“We want people to get ready to have a good time.  It’s been a while,” said Hall, Schumer and Sykes.

“We’re invigorated by Will’s vision for this year’s Oscars: celebrating movie lovers alongside moviemakers and spotlighting fan favorites that prove how cinema can unite us all,” said Academy President David Rubin and Academy CEO Dawn Hudson.  “Hosting this star-studded party are three powerful, funny women inviting us to laugh and cheer for the year’s best and brightest in film.”

“Imagine having one of the funniest women in comedy today hosting the Oscars… Now, multiply that by three,” said Craig Erwich, president, Hulu Originals and ABC Entertainment.  “Regina, Amy and Wanda are comedy powerhouses who will make history as the first female trio to host the biggest night in entertainment, and we’re thrilled to have them at the helm to deliver an incredible show full of unforgettable moments and laughter.”

Award-nominated actor and producer Hall will star in the upcoming “Master,” on which she also served as executive producer, and is a producer and star of “Honk for Jesus, Save Your Soul.”  She recently appeared in the series “Nine Perfect Strangers” and starred in the feature film “Girls Trip.”

Schumer is an Emmy®, Peabody and Critics Choice Award-winning comedian, actor, writer, producer and director.  She is a writer, director, executive producer and star of the upcoming comedy series “Life and Beth,” and starred in such features as “The Humans,” “I Feel Pretty” and “Trainwreck,” which she also wrote.

Sykes is an Emmy-winning writer, comedian, actor and producer.  She is a creator, executive producer, writer and star of the comedy series “The Upshaws” and can be seen in the upcoming series “History of the World; Part II.”  Her credits also include the stand-up special “Wanda Sykes: Not Normal,” “The Other Two” and “Monster-in-Law.”