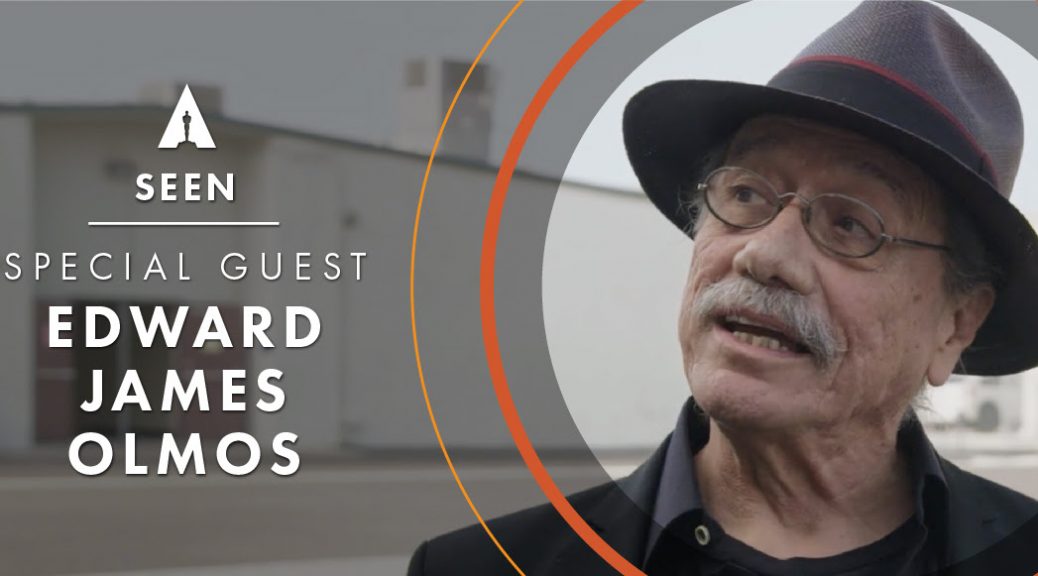 The Academy continues “Seen,” a series of candid interviews on culture, identity and representation with some of today’s most influential filmmakers and artists.  Available now on the Academy’s YouTube, episode 2 features Edward James Olmos – nominated for a 1988 Best Actor Oscar® for his role as Jaime Escalante in “Stand and Deliver”– in conversation with journalist Nick Barili, the series host.

Olmos invites Barili to meet him at Bell Gardens Intermediate School, a site of Olmos’s Youth Cinema Project, to see firsthand how the program empowers students to tell their stories on film.  Olmos reflects on growing up in the cultural diversity of East Los Angeles, his stints in baseball and rock ’n’ roll before he finally landed on acting, and the importance of collaboration and creative control.  He discusses what his roles in “Zoot Suit” and “Stand and Deliver” mean to him, as well as the larger culture, and why he regularly turns down work.

For more information on this episode of “Seen” and others in the series, please click here.

HIGHLIGHTS:
“The story itself, the truth of the story itself, is powerful.  A hundred years from today, that movie will be seen and understood and be appreciated.  All we wanted to do is just document the behavior of this man.  And we did it, and I was very fortunate I was able to do it.” – Edward James Olmos on “Stand and Deliver”

“To me, trying to understand your life and then your culture, and your heritage, and the roots that make you the tree that you are, and the human being that you are, sharing it so that others can understand it, makes everybody stronger.”

“Out of a necessity to stay alive in this industry, I had to learn the full usage of storytelling, whether it be in songwriting, filmmaking, or theater.  If we weren’t creating it, we weren’t gonna be able to do it, because nobody was creating it for us.”

Los Angeles, Calif. – The Academy of Motion Picture Arts and Sciences today launched “Seen,” a new interview series that follows Argentinean-American journalist, director, writer and producer Nick Barili as he sits down for one-on-one conversations with some of the film industry’s most influential artists and filmmakers with Latin-American and Spanish roots.  In the first season, Academy members John Leguizamo, Eva Longoria and Edward James Olmos share their personal journeys. Watch the trailer on the Academy’s YouTube.

The series kicks off in Leguizamo’s New York home, where the actor, writer, director and producer talks about his journey from troublemaker to trailblazer.  Leguizamo discusses maneuvering through the industry over his decades-long career, both in front of and behind the camera. The episode is available now on the Academy’s YouTube.

In the series’ upcoming installments, Barili joins Edward James Olmos for a visit to students in the Youth Cinema Project program at Los Angeles County’s Bell Gardens Intermediate School (episode available on January 31) and meets with Eva Longoria for a tour of California State University, Northridge, from which she received a master’s degree in Chicano Studies in 2013 (episode available on February 7).

A first-generation immigrant, Barili s the founder of Hard Knock TV, YouTube’s first hip hop channel, which has garnered more than 100 million views and 285,000 subscribers.  Over the course of his career, Barili has interviewed over 300 artists, hosted a show on Apple Music’s Beats 1, and spoken on and moderated industry panels for YouTube and Google and more.

Read more about Barili and “Seen” in his interview with the Academy’s A.frame.