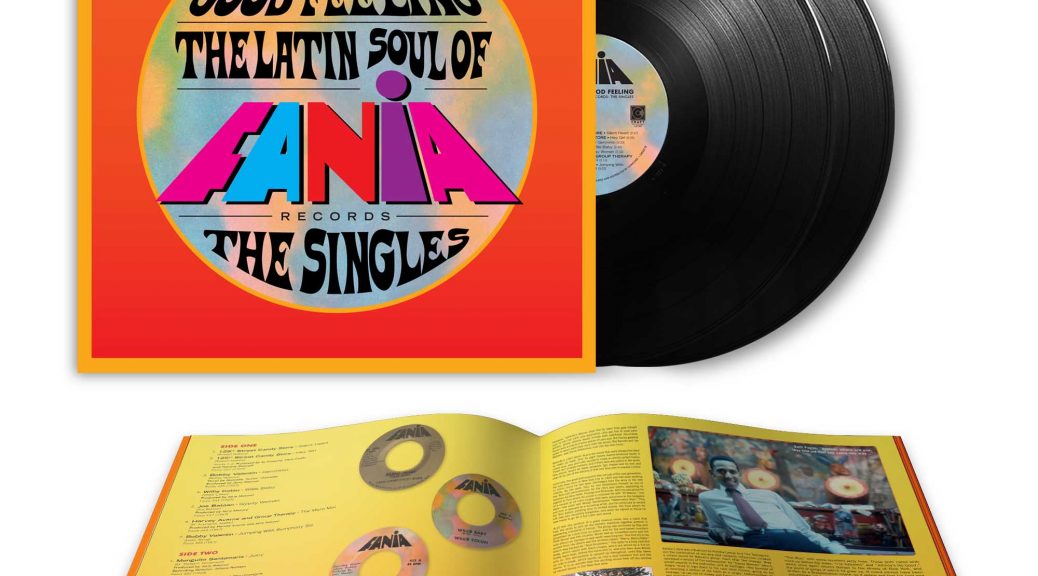 IT’S A GOOD, GOOD FEELING: THE LATIN SOUL OF FANIA RECORDS (THE SINGLES) CELEBRATES THE LEGENDARY LABEL’S ERA-DEFINING LATIN SOUL AND BOOGALOO SONGSSpanning 1965–1975, the collection features single versions of 89 tracks from Ray Barretto, Joe Bataan, Ralfi Pagan, and Larry Harlow, among others, including rarities and B-sides.

Set for release on October 8th and available for pre-order today, It’s a Good, Good Feeling includes four CDs plus a bonus 7-inch single, all housed in a 60-page hardcover book, featuring extensive new liner notes by compilation co-producer and DJ Dean Rudland, as well as photos and ephemera from Fania’s archives. Helping to set the scene is a 7-inch single, which culls vintage promo tracks for “Symphony” Sid Torin’s radio shows on New York’s WEVD AM and FM. The famed DJ was an early champion of Latin music and helped to popularize the genre in the ’60s. Featuring newly remastered audio by the GRAMMY® Award-winning engineer, Paul Blakemore, It’s a Good, Good Feeling will also be available on digital and streaming platforms, while an abridged, 2-LP vinyl edition of the compilation offers 28 choice cuts and an eight-page booklet. A collectible orange-crush colored pressing (limited to 300 copies) and a commemorative T-shirt can be found exclusively at Fania.com. The first instant grat. single “Gypsy Woman,” Joe Bataan’s 1967 debut hit, is available to stream/download today.

In the ’60s, a unique musical moment was brewing in New York City, as young Latin American artists—many of them second-generation—found themselves split between the traditional music they grew up on and the rising sounds of soul, doo-wop, and R&B. They began experimenting in the clubs, blending Afro-Cuban beats, Latin jazz, and soul with predominantly English lyrics. The result was a delectable new genre with broad appeal that epitomized the cultural melting pot of New York. While boogaloo and Latin soul was a short-lived craze (peaking in the late ’60s and early ’70s), it popularized Latin music in America and established the careers of many internationally beloved artists.

Fania Records was founded just prior to the rise of boogaloo in 1964 by bandleader Johnny Pacheco and his lawyer, Jerry Masucci. Over the next few years, Fania would sign and nurture a variety of emerging Latin soul artists. As Rudland points out in his notes, “Fania was not the first label to release Latin soul, but they were vital within its rise, releasing important records, and its owners patently understood the opportunity it allowed the young label to expand quickly.”

Among their earliest signings were Willie Colón, Joe Bataan, Bobby Valentín, and Ray Barretto: four rising stars who were all eager to experiment with their sounds—and Fania gave them the freedom to do so. Colón, who became one of the label’s most celebrated artists, rarely strayed from traditional stylings but offered one foray into Latin soul with his debut single, “Willie Baby” (1967). Valentín, meanwhile, straddled the line stylistically, but scored several boogaloo hits for the label early on, including 1967’s joyful “Geronimo” and “Bad Breath,” as well as the anthemic “Use It Before You Lose It” (1968).

Barretto, who had already established himself—and the boogaloo sound—prior to signing with Fania, was known for such foundational hits as 1962’s “El Watusi.” Once he joined the burgeoning label, however, he recorded one of the genre’s most important albums, Acid (1968), which spawned such enduring singles as “A Deeper Shade of Soul” and “Mercy, Mercy Baby.” Latin soul regularly reflected the political tensions of the ’60s and Barretto, in particular, often delivered socially conscious messages in his songs, including the funky “Together” (1969) and “Right On” (1971).

Bataan, meanwhile, burst onto the scene in 1967 with a cover of The Impressions’ “Gypsy Woman”—the title track of his debut album. A year later, he followed with “Subway Joe,” which, Rudland argues, is “the pinnacle of Latin soul,” and scored an R&B crossover hit with a two-part cover of Smokey Robinson & The Miracles’ “It’s a Good Feeling” (subtitled “Riot” by Bataan). The artist also found broad success with emotion-filled ballads like “Sad Girl” and the epic “My Opera” (both 1969), as well as a dramatic cover of The Beatles’ “This Boy” (1971).

Taking the soul route even more directly was Ralfi Pagan, who scored a multitude of R&B hits in both English and Spanish, including sultry covers of Bread’s “Make It with You” (1971) and the Drifters’ “Up on the Roof” (1973), as well as the up-tempo “Wonderful Thing” (1974), and the reflective “Just for a Little While” (1975).

The man behind many of Pagan’s hits, as well as songs by Barretto, Bataan, and lesser-known Fania acts like the Latinaires and Ronnie Marks, was producer, songwriter, and musician, Harvey Averne. While Averne was not of Latin heritage, he was deeply entrenched in the scene and released several of his own albums and singles under a variety of monikers, including the swinging “Make Out” (Harvey Averne + 9, 1967), “The Micro Mini” (Harvey Averne and Group Therapy, 1967), and “Accept Me” (The Harvey Averne Dozen, 1968).

Larry Harlow was another white bandleader who found success in the Latin market, signing to Fania in 1965 and enjoying a long and prolific run with the label. While the majority of his work was more traditional fare, he did deliver several soulful tracks in the late ’60s with his Orquesta Harlow, including such funky cuts as “Mess Around” and “That Groovy Shingaling” (both from 1967’s El Exigente album) as well as a 1968 cover of Hugh Masekela’s “Grazin’ in the Grass.”

In addition to such legends as Louie Ramirez (featured alongside Bobby Marin as “Ali Baba” in this compilation) and Mongo Santamaría, the Fania All Stars also make an appearance on It’s a Good, Good Feeling. The supergroup—which, at the time included the likes of Bataan, Valentín, Barretto, Ramirez, and Colón, plus a handful of special guests—offered Fania an opportunity to showcase its talented roster. The two tracks here (“Richie’s Bag” and “Red Garter Strut”) are culled from the group’s 1969 live album, Live at the Red Garter, Vol.2, and feature vocals by the great Richie Ray.

By the mid-’70s, the popularity of boogaloo had widely given way to salsa—and Fania quickly rose to become a leader in the genre. While salsa ultimately proved to be the more enduring style, the success of boogaloo and Latin soul was instrumental in paving the way for its mainstream appeal. Many of the artists who found early fame with Latin soul records, meanwhile, would go on to enjoy thriving careers, including NEA Jazz Master Award-winner and International Latin Music Hall of Fame Inductee Ray Barretto, Joe Bataan, Bobby Valentín, and Latin Grammy Lifetime Achievement Award-winner, Larry Harlow.

Click here to pre-order the collection today, or to stream “Gypsy Woman” and pre-save the digital album.

Beverly Hills, Calif. –  Betty White is set to be honored at The Paley Honors in Hollywood: A Gala Celebrating Women in Television in Hollywood on October 12. The gala event is designed to celebrate eight decades of groundbreaking accomplishments of women in television, across genres, and will feature a look back at White’s seven-decades long career.

“I am thrilled to be honored by the Paley Center,” Betty White said in a statement.  “To be acknowledged for working in a business I love for as long as I have is truly a privilege. I’m proud to share this evening with these amazing and talented women.”

They will look back over television history from the antics of Lucille Ball in “I Love Lucy” to Ellen Degeneres’ groundbreaking coming out moment on her sitcom to record-setting achievements from athletes like Billie Jean King and Jackie Joyner-Kersee and global reporting from the likes of Katie Couric, Rachel Maddow, Diane Sawyer and Barbara Walters.

“The Paley Center is so proud to honor this incredible group of women at this once-in-a-lifetime event,” Maureen J. Reidy, The Paley Center for Media’s president and CEO, said in a statement. “No other medium has brought people together the way television has, and this is the perfect time to celebrate the pioneering entertainers, groundbreaking series, and current hit shows that have sparked conversations, educated audiences, and thrilled generations.”

Proceeds from the evening will benefit the Paley Center’s programming dedicated to women in television, as well as the expansion of the women’s collection in the Paley archive, which with more than 160,000 programs, is the nation’s largest publicly accessible archive of television and radio programming.

Ko OLINA, Hawaii (January 19, 2012) – There’s lots and lots of fun for all ages at Aulani, a Disney Resort & Spa in Hawaii. Everyone – adults, teens and kids – can enjoy amazing adventures with one of the greatest pools on Oahu, the secluded beach and lagoon, guided excursions and activities, delectable dining and enchanting entertainment.

And now Aulani offers a sixth night free plus complimentary breakfast,* when guests book a five-night consecutive stay at the spectacular oceanfront resort with a touch of Disney magic. Now there’s an opportunity to experience even more of the resort’s family activities, world-class entertainment and dynamic water playground.

With this special offer, guests can extend their stay and also enjoy complimentary continental breakfast daily in the resort’s lounge, The ‘Ōlelo Room.  The continental breakfast features a selection of fruits, pastries, coffee and hot teas, plus the opportunity to learn some Hawaiian language in the popular ‘Ōlelo (“Word”) Room lounge which features wooden sculpture representations of common objects and labels that convey their Hawaiian names.

Set on a beautiful lagoon along the coast of Oahu, Aulani welcomed its first guests on Aug. 29, 2011. The family vacation paradise offers something for everyone in an unforgettable experience combining the beauty and spirit of the Hawaiian islands with the magic of Disney storytelling and guest service.

Each day of their stay, Aulani guests can customize their experience – relaxing on the beach or in the 18,000-square foot Laniwai spa, playing in the pools and snorkeling at Rainbow Reef, or discovering the island on special excursions. Among the unique experiences at Aulani are the Makai Preserve stingray adventure, the Painted Sky teen lounge and spa, and the Menehune Bridge, a water play area full of fun and surprises. Aulani also features two signature restaurants – the oceanfront, full-service ‘AMA ‘AMA and the buffet-style Makahiki – offering foods inspired by Hawaii.

Aulani is situated upon 21 acres of oceanfront property in Ko Olina, adjacent to a nine-acre, crystal-blue lagoon and white-sand beach. Ko Olina is 17 miles from Honolulu International Airport and less than an hour from Waikiki Beach. When all phases are complete, Aulani will include 359 traditional hotel rooms and 481 two-bedroom equivalent Disney Vacation Club villas in two towers, each featuring rooms that offer thrilling views of the ocean, mountains and the magnificent, lush surroundings.

*The number of rooms allocated for this offer is limited. Excludes Resort fees and taxes.  Not valid in combination with any other discounts or offers. Offer excludes suites and three-bedroom Grand Villas.  Additional per adult charges may apply if more than two (2) adults per room.  Offer applied once per reservation and not valid for previously booked rooms.  Check for offers for other lengths of stay.  Limit two (2) rooms per reservation and subject to room occupancy limitations.  Advance reservations required.  Subject to restrictions and change without notice. Breakfast entitlements expire upon checkout, and are for guests ages 3 and older in the traveling party.

About Aulani, a Disney Resort & Spa
Uniquely designed for families and inspired by the wonders and traditions of Hawaii, Aulani is a family paradise with a touch of magic. Aulani offers kids, adults and families Hawaiian vacation experiences with a special magic that only Disney can create. Delightful rooms and spacious Disney Vacation Club villas, a perfect location on a beautiful beachfront lagoon, and renowned Disney service and enchanting entertainment let dreamers of every age savor their time together on Hawaii as never before.