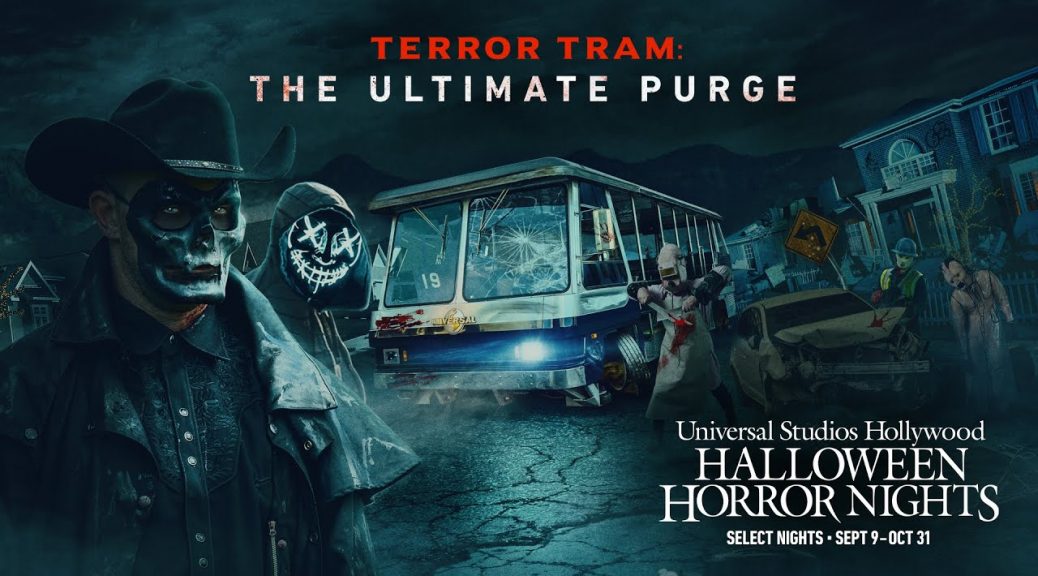 New ticket options, including the R.I.P. Tour, Ultimate Fear and Frequent Fear passes, provide a one-of-a-kind experience to this year’s most extreme and intensely immersive Halloween event as fans will be terrorized and entertained by new mazes, Terror Tram, scare zones, theme park attractions and a hip hop show.

Based on the successful Universal Pictures and Blumhouse Productions’ film franchise, “Terror Tram: The Ultimate Purge” takes guests on a nightmarish journey into the world of The Purge as they try to survive the night along the world-famous Universal backlot. The annual tradition of The Purge is a one-night event when all crime is legal; however, as the latest film The Forever Purge depicts, members of an underground movement believe that The Purge should be every day – and plan to overtake America through a relentless campaign of mayhem and massacre. Click here for a chilling first look at “Terror Tram: The Ultimate Purge.”

Guests will be stalked at every turn in the “Halloween 4: The Return of Michael Myers” maze, based on the classic slasher from Trancas International Films. With his haunting white mask and signature steel knife, the relentless Myers is ready to resume his killing spree and terrorize the people of Haddonfield as he hunts for his niece Jamie to finally seek his revenge. Click here for a terrifying preview of “Halloween 4: The Return of Michael Myers.”

“Halloween Horror Nights” at Universal Studios Hollywood brings together the sickest minds in horror to immerse guests in a living, breathing, three-dimensional world of terror inspired by TV and film’s most compelling horror properties.

·       “The Haunting of Hill House,” based on Netflix’s critically-acclaimed supernatural thriller.

·       “Universal Monsters: The Bride of Frankenstein Lives,” inspired by Universal Pictures’ cinematic monsters with an all-original story about one of the studio’s most infamous creatures. GRAMMY® Award-winning musician, SLASH collaborates with Universal Studios Hollywood to compose an original score for the maze and scare zone.

·       “The Exorcist” maze will possess guests as they live the tormented aberrations experienced by Regan and her determined mother.

·       “The Curse of Pandora’s Box” is an original concept maze inspired by the most fearsome creatures in Greek mythology.

All-new scare zones designed to taunt, terrorize and torment guests as they navigate the darkness from one frightening maze to another will come to life throughout the theme park with these chilling experiences:

In addition to the “Halloween Horror Nights” mazes, guests can also enjoy select theme park attractions that will be open during the run of event, including “Jurassic World—The Ride,” “Harry Potter and the Forbidden Journey,” “Flight of the Hippogriff,” “Revenge of The Mummy—The Ride,” “Transformers: The Ride—3D” and “The Simpsons Ride.”

Tickets are available at Hollywood.HalloweenHorrorNights.com, and those tickets purchased online provide guests early admission with entry beginning at 6:00 p.m. each night of “Halloween Horror Nights.”  Advance purchase is recommended as event nights are expected to sell out.

·       Frequent Fear Pass: visit up to 26 select nights during the seasonal event

The event also comes to life at Universal Orlando Resort which celebrates 30 years of fear this year.