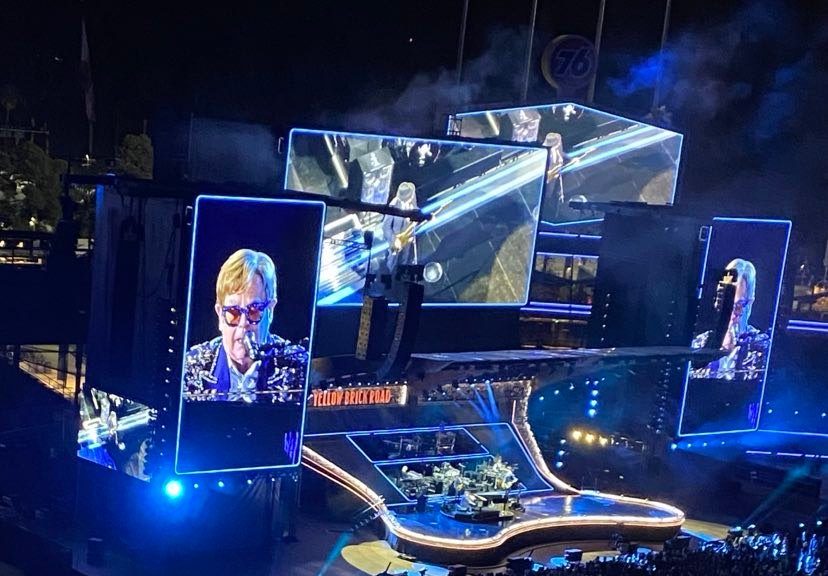 It’s been a long long time, but nearly 50 years after donning his glittering Dodger blues, Elton John and his band proved that the ’70s will never go out of style, much like the 75-year-old icon of sequin and cool himself, as he took to the stage once again at Dodger Stadium during the opening set of his final North American tour in Los Angeles this weekend. It was a jam night like no other as Sir Elton and his bandmates poured their heart and soul into the rhythm and blues, fused with the familiar glam-rock ‘n’ roll ballads that generations of fans have come to know and love, a masterpiece for all to see.

Excitement and a certain sparkle lit up Dodger Stadium and the world can watch as the final show streams live on Sunday on Disney+. The opening night of the Farewell Yellow Brick Road tour, took fans on a journey through time and space as the Rocket Man himself showed that he’s still standing after all these years as he reflected on his friendships, paying tribute to those who influenced his art. A master showman, his gospel was well received by his fans.

Sir Elton, wearing shimmering Dodger robe and cap, thanked his fans for dressing up, as rows of feathers, sequin, hats, blinking necklaces and rhinestone studded glasses glittered in the night. Filled with emotion, John, whose songs traverse the universe of musical genres, also thanked the crowd for still buying his records after all these years. The legendary singer’s candle will never go out, but with a little luck, lets hope this won’t be his last goodbye along the Yellow Brick Road with all of the love that was felt tonight.

Margie Anne Clark is a Los Angeles based writer.