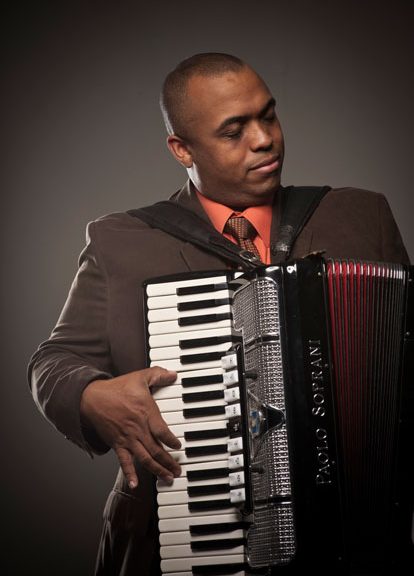 Hollywood, Calif. – From Louisiana to Hollywood, and beyond – the music industry is all a buzz, over the Grammy nomination for Corey Ledet’s self-titled album Corey Ledet Zydeco – in The Best Regional Roots Category. The competition is fierce but this seasoned, gifted musician feels that it is already a win just to be nominated. He says, “It’s a blessing, a win either way, to have my work reach this level for the 2nd time, it’s just truly an amazing feeling, holding on to my childhood dream of 30 years”.

The 64th Annual Grammy Awards promises to be super exciting, come Grammy Day all bets are off, and the second time is a charm.

No stranger to the Grammy Nomination process, Corey Ledet’s first nomination was in 2012 for his project, “Nothing But The Best”, in The Best Regional Roots Album category, for The 55th Grammy Awards. His latest project Corey Ledet Zydeco was released on January 15, 2021, produced by Corey Ledet and Louis Michot. Recorded at Dockside Studio, in Maurice Louisiana. It was engineered and mixed by Justin Tocket, and mastered by Mark Bingham at Nina Highway Studio in Henderson, Louisiana. The talent on the album is incredible, musicians: Corey Ledet, played accordion, drums, washboard and vocals. Cecil Green played the Hammond B3 Organ, Lee Allen Zeno on Bass Guitar, Grant Dermody on Harmonica, Julian Primeaux, Rhythm and Lead Guitar, and Background Vocals, Gerard Delafose on Drums, and Washboard.  The tracks include; This is all I want, Buchanan Ledet Special, Mo Marche, Pel Mo, On a Roll, Flip Flop and Fly, It’s Gonna Be Alright.

Corey Ledet Zydeco pays homage to Ledet’s family and musical heritage, which are inextricably combined. His great-grandfather, Gabriel Ledet, played professionally with the colorful early Jazz legend Bunk Johnson as an upright bassist. Grandfather, Buchanan played drums with Clifton Chenier and Rockin’ Dopsie, as Zydeco’s first drummer and invented the twice-pumped bass drumming pattern called “double clutching” that’s been an integral part of the genre ever since. Numerous members of this extended French speaking Creole family followed in their footsteps, playing professionally and non-professionally in the decades that followed. Corey’s rise to Zydeco royalty in the 21st century was bound to happen.

Working towards promoting the cultural heritage of Corey Ledet’s family’s hometown of Parks, Louisiana, he studied and incorporated Kouri-Vini, a regional dialect spoken by family members into songs on this album.

A Houston, Texas native, Ledet spent his summers with family in small-town Parks, Louisiana. The Creole culture has its roots in Louisiana, but spread across the country, including neighboring Texas. His love for the Creole/Zydeco music was instant and hard for him to ignore. Corey says, “Zydeco is feel good Louisiana Creole music, it was designed to heal the sou,l to forget your troubles, and to enjoy life even for just a little while”. Corey Ledet studied with the originators of this music; Clifton Chenier, John Delafose, and Boozoo Chavis. At the early age of 10, he picked up shows playing drums for Houston-baseband Wilbert Thibodeaux and the Zydeco Rascals and slowly learned the main instrument of the music – the accordion. He came to truly love any type of accordion – the single-note, triple-note and piano key accordions – and any others. Corey eventually moved to Louisiana fulltime, to be closer to the music he loves and knows so well. Corey Ledet is able to infuse old and new styles of Zydeco into his own unique sound from all of the people he studied and was influenced by.

Corey Ledet also appreciates the other traditional sound indigenous to Louisiana in Cajun music and has been able to expand his repertoire to include these influences as well. Ledet’s feel good spirit comes through the music at every level. He loves to give his listeners a true dance/music experience, in the ways of old-time house parties.

Corey Ledet is a force of nature; you will not be able to contain yourself, with his toe tapping dance style zydeco music. Feeling good is contagious, don’t fight it; the rhythm is going to get you.