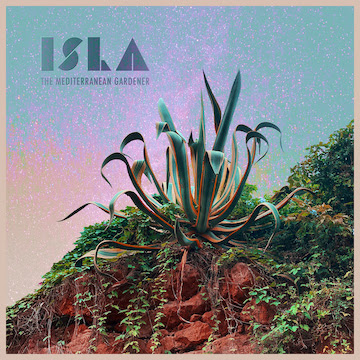 Los Angeles, Calif. – First released as a Bandcamp exclusive, Isla’s digital-only debut album, The Mediterranean Gardener, will see a wide release on August 27. The first single from the album, “Until the Sun Comes Out,” is available today; listen here. Musically reminiscent of Echo and the Bunnymen and The Cure, “the song just wrote itself,” says acclaimed singer/songwriter Josh Rouse of the first single from his new solo project, Isla. The Mediterranean Gardener is a nine-track album of gorgeous chilled-out electronica that provides a refreshing musical tonic for these stressful times.

From the eerie Eno-like ambient opener of “Buenas Noches Baby” to the laid-back grooves of “It’s Not That Far” to the Brazilian chords and melodies of the Jobim-esque “Color De Vida,” the album is an alluring mix of lyric and instrumental tunes that meld together so smoothly that they feel more like a whole piece of music rather than a collection of songs. Realizing the music was far from the guitar-based, storytelling style for which he’s known, Rouse felt it needed its own name and Isla was born.

Recorded mainly at his small studio near his Valencia, Spain home, Rouse created the primarily instrumental album during the confines of 2020. It’s “a stress-free atmosphere with breezy, improvised electronica,” says Rouse. “I was really just looking for vibes that were soothing. I didn’t want anything that was aggressive.” Rouse was joined on the recording by frequent collaborator Daniel Tashian, who plays keyboards and Linn drums on “12 Bars,” which he co-wrote.

The album was mixed by longtime producer Brad Jones and mastered by Mike Westbrook. The distinctive album cover was designed by Rouse’s wife, artist/singer Paz Suay, who also provided backing vocals on “12 Bars” and “It’s Not Too Far.” The Mediterranean Gardener Tracklisting:1. Buenas Noches Baby2. It’s Not That Far3. Color De Vida4. 12 Bars5. A Sunny Day6. For The Love of a Girl7. Night Moves8. Until the Sun Comes Out9. Attention Pre-order the album here.