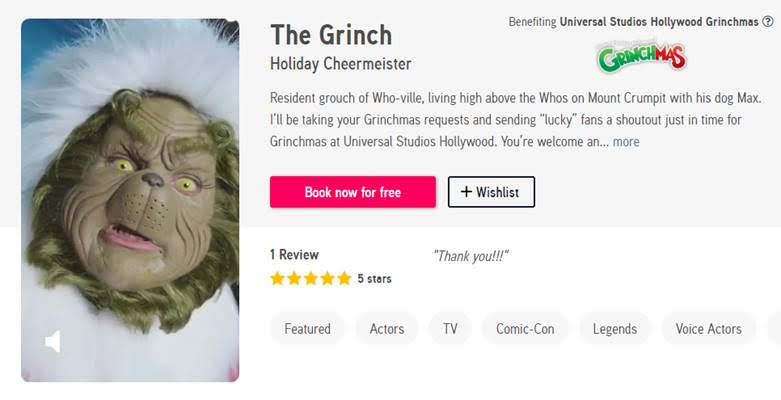 “Grinchmas” and “Christmas in the Wizarding World of Harry Potter™” Kick Off on Thursday, November 28 and Continue Daily through Sunday, December 29 at Universal Studios Hollywood

Guests are now invited to visit Cameo.com/TheGrinch to take advantage of this exclusive, limited-time opportunity today, November 26 through Sunday, December 8 https://www.cameo.com/TheGrinch The site features easy-to-follow instructions on how to request personalized video messages from The Grinch that will arrive in friends and family’s inboxes just in time for the Who-lidays, complete with the recipient’s name and suggested greeting.

For in-person interactions with The Grinch and his faithful dog Max, guests can experience “Grinchmas™” at Universal Studios Hollywood and see first-hand how the Mean One really isn’t so mean after all.

The whimsical spirit of holiday also brings the seasonal return of “Christmas in The Wizarding World of Harry Potter™” to Universal Studios Hollywood as the theme park transforms into a winter wonderland bringing merriment and cheer to families and friends.

“Grinchmas” and “Christmas in The Wizarding World of Harry Potter” are included in the price of theme park admission and begin on Thursday, November 28, running daily through Sunday, December 29, 2019.

A highlight of this year’s “Grinchmas” event is the all-new, state-of-the-art, topsy-turvy “Grinchmas” tree that twists and turns over 55 feet in height.

The custom-made tree is adorned with hundreds of ornaments and thousands of sparkling LED lights and choreographed to music to brighten the merry “Grinchmas” Who-lebration.  Dazzling “Grinchmas” tree lighting ceremonies that take place every evening, accompanied by a snowfall flurry, bring this annual favorite to life, creating a festival of fun fit for The Grinch, his faithful dog Max and a roster of Who-ville Whos.

About Dr. Seuss
Theodor Seuss Geisel is quite simply the most beloved children’s book author of all time. Winner of the Pulitzer Prize in 1984, three Academy Award, two Emmy Awards, three Grammy Awards, and three Caldecott Honors, Geisel wrote and illustrated 45 books for children. Hundreds of millions of copies have found their way into homes and hearts around the world. While Theodor Geisel died on September 24, 1991, Dr. Seuss lives on, inspiring generations of children of all ages to explore the joys of reading. For more information about Dr. Seuss and his works, visit seussville.com.

About Cameo
Cameo is the first service enabling consumers to book personalized video messages from their favorite talent. In just over two years, the company has built a talent portfolio of more than 20,000 VIPs and fulfilled more than 400,000 requests ranging from birthday and good luck messages to prom invitations, marriage proposals, baby gender reveals and beyond. For more information, visit www.cameo.com.