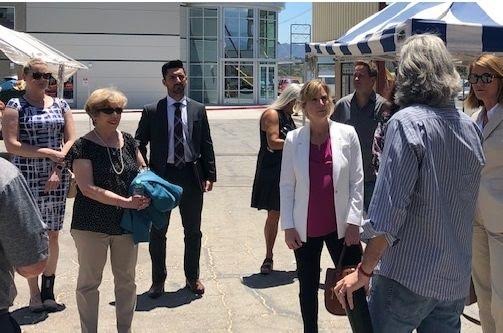 During the tour, Mayor McLean and attendees met with City staff to receive an update on the state of filming in Santa Clarita and the role of the City’s Film Office, learning more about the value of incentives offered to productions that film in the City. Following the information session, the group toured Santa Clarita Studios with studio President Mike DeLorenzo.

“The City of Santa Clarita is a premier film destination that is home to more than 20 soundstages and ten plus movie ranches. We are proud to say that more than 6,000 Santa Clarita residents currently work in the film entertainment industry,” said Mayor McLean. “Additionally, filming in Santa Clarita is a great revenue generator that enables the City to provide residents with a high quality of life. The City Council wholeheartedly supports this vital industry.”

The California Film Commission administers the Film & Television Tax Credit program, which provides tax credits for qualified expenditures for eligible productions produced in California. This program allows filmmakers to recoup up to 25 percent of their spending (up to the first $100 million) on crew salaries and other qualified costs.

Combining this with the City’s Film Incentive Program, which was approved by the City Council in 2009, filmmakers choose to shoot in Santa Clarita due to the ability to receive subsidized permit fees and reduced costs for on-set safety personnel. The City is an active member of the Film Liaisons in California and has historically worked closely with the California Film Commission to follow industry best practices.

Since the Film Incentive Program was approved in 2009, more than $525,000 has been refunded to projects approved under the CA Film & Television Tax Credit program. At the same time, the local community has received an estimated $114.8 million in positive economic impact from these incentivized productions.

Residents can also discover the rich history of filming in the City by visiting filmsantaclarita.com. Filmmakers wanting to explore the Film & Television Tax Credit program can visit the California Film Commission website at film.ca.gov.