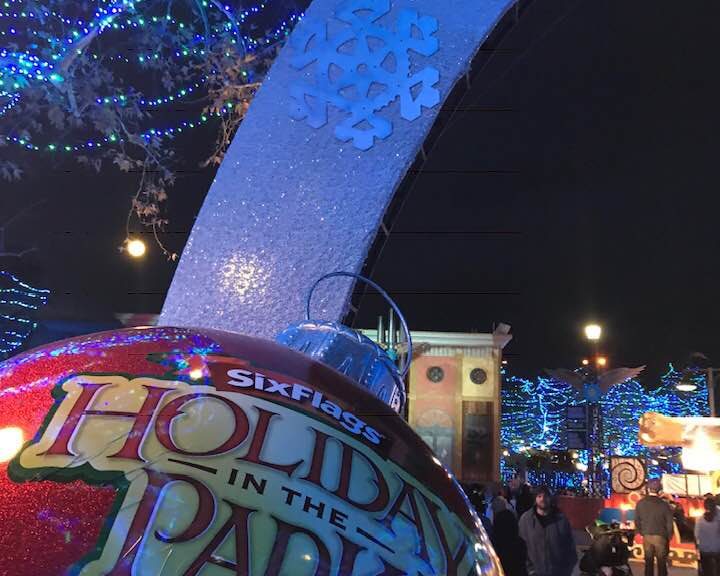 “The noblest art is that of making others happy.” – P.T. Barnum

Santa Clarita, Calif. – Oh what fun it is to ride at Six Flags Magic Mountain during its Holiday in the Park. The iconic rollercoaster destination is a magical winter wonderland with millions of twinkling lights, carolers, holiday entertainment, and your favorite thrilling rides. It’s the most magical time of the year at the Thrill Capital of the World as the park is open every day, including Christmas Day, now through Dec. 30, 2018.  (Update as of Dec. 30, 218: extended now through January 5, 2019)

Kwerkmas is an exciting enthralling live trapeze act that’s sure to delight with it’s unique brand of storytelling and daring. A unique steampunk-themed display of acrobatic artistry with trapeze artists, gymnasts, and aerial stunts in the Gearworks Theater.  Check the Six Flags App for show times. Nothing provides more lasting memories than a great show. Especially when shared with friends and family. That’s why, in addition to the most thrilling rides on the planet, you’ll find a wide variety of top-shelf entertainment right here at the park. The kind of entertainment you’ll be talking about for years to come.

A favorite that the whole family can enjoy together, join members of the JUSTICE LEAGUE™ Reserve Team in a multi-sensory four-minute game experience facing wind, fire, fog and special effects as you battle alongside iconic DC Super Heroes, Batman, Superman, Wonder Woman, The Flash, Cyborg and Green Lantern to save the city of Metropolis from Lex Luthor, The Joker and his henchmen.  Also wreaking havoc is Harley Quinn, The Joker’s favorite sidekick.

Prepare to be immersed in climatic battle scenes between the DC Super Heroes and Super-Villains including a multitude of special effects and thrilling ride experiences as you shoot targets and score points against your friends and family while traveling on a high-speed chase through the streets of Metropolis!J

Have a ball making merry memories in this larger-than-life display of ornaments with programmable dancing light shows.

“Yule want to get in on all of the fun of Six Flags Magic Mountain.”

Six Flags Magic Mountain’s world renowned roller coasters, known far and wide as one of the best roller coasters in the state, Goliath drops you more than 200 feet and stops suddenly, leaving you hanging on your side at another point. At a record-breaking 170 feet in the air, the newest, CraZanity reaches speeds up to 75-miles-per-hour, as it swings back and forth—higher and higher giving riders a staggering view of the world below. Other spectacular roller coasters include the 100-mph Superman: The Escape, and Twisted Colossus, a wood and steel hybrid. Pint-sized rides for the kids include Elmer’s Weather Balloons, Taz’s Trucking Co., and Yosemite Sam’s Flight School. The rides become even more magical with the Holiday lights, sights and sounds of the season.

Yule want to get in on all of the fun and you won’t want to miss the excitement of Six Flags Magic Mountain just north of Los Angeles. It’s a gem in your own back yard if you’re a local and during the Holidays it’s fun place to be with your family and friends to get into the spirit of the season, now and all year long!