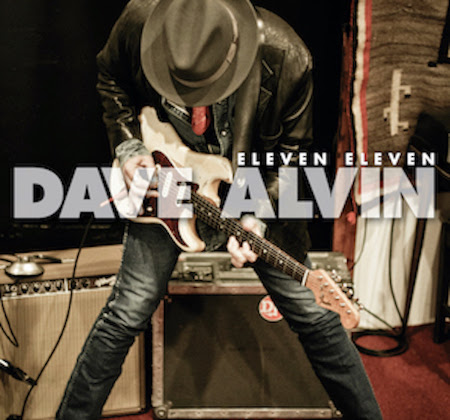 Originally released in 2011, Eleven Eleven  includes songs often heard in Alvin’s live set, including “Johnny Ace is Dead,” “What’s Up With Your Brother” featuring Phil Alvin, and “Harlan County Line,” which was featured on the TV show Justified, in which Alvin guest starred. With new sequencing by Alvin, the expanded edition features three bonus tracks and is available on CD and LP.

Upon its original release, the album received critical praise with American Songwriter noting the album’s best songs were “character studies or snapshots of history. Many hailed “Johnny Ace is Dead” as one of the best songs on the album with PopMatters hailing it “the best damn Johnny Ace song one could ever imagine.”

BMG Books recently released New Highway, which features a generous selection of Alvin’s celebrated poetry; excerpts of his moving prose; newspaper articles and essays on artists including Frank Zappa, Bo Diddley and Ray Charles, a piece which earned Alvin a Grammy® nomination; tributes to friends and influences such as Nanci Griffith and Merle Haggard; a long-lost interview with Buck Owens; several of his album notes and, of course, a carefully curated representation of his inimitable lyrics.

Dave Alvin and Jimmie Dale Gilmore will hit the road again in January with three Texas dates, followed by a rescheduled eight-date run through CA and AZ in February. The complete list of dates is below; tickets are now on sale.

Since their last tour in the fall of 2019, much has happened in the world, including Alvin’s private battle with cancer. He recently talked exclusively with Rolling Stone about that journey: read here. “As you can imagine, after the last two and half years of fighting cancer, I am very excited and happy to be going out on the road again,” exclaims Dave Alvin. “Please join me, Jimmie Dale Gilmore and all of our musical tribe, as we celebrate with some loud and glorious, guitar bashing and life affirming noise.”

Named for their hometowns in Southern California and West Texas, respectively, on their critically acclaimed collaborative album, Downey To Lubbock, “the two combine their individual aesthetics perfectly” (Paste) delivering “an alternatively sweet, touching, rousing and undeniably heartfelt set that plays to both artist’s strengths.” (American Songwriter). Part road map and part love letter: the twelve-song collection spans nearly a century of material and are tributes to mutual heroes, friends gone too soon and lifetimes spent on the highway “living off dreams and gasoline.”

Eleven Eleven is among several artist anniversary titles being reissued on LP by Yep Roc Records this fall.