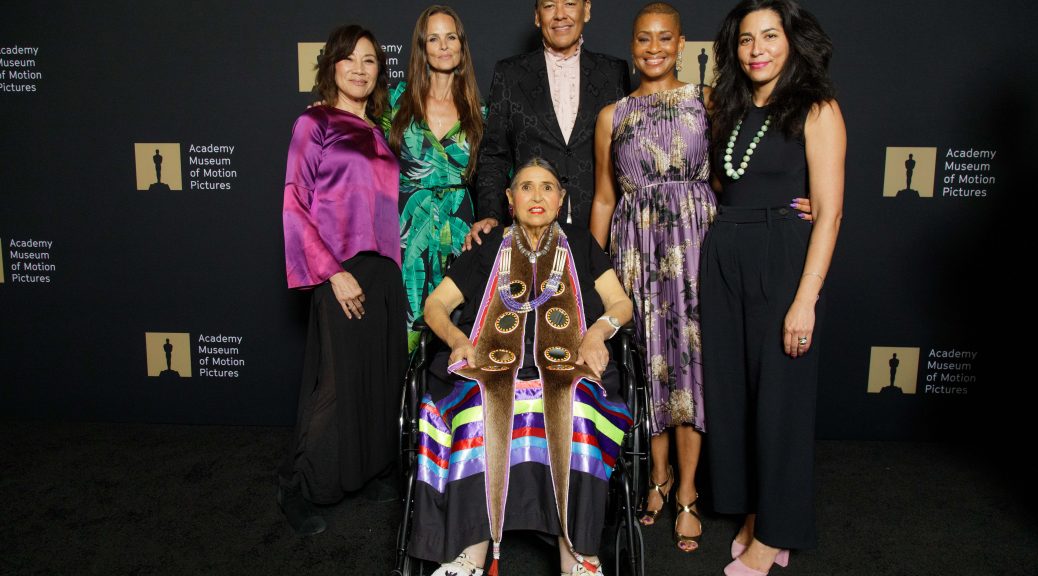 Los Angeles, Calif. – On September 17, 2022, luminaries from the Native American, Indigenous, and entertainment communities came together at the Academy Museum of Motion Pictures in Los Angeles for An Evening with Sacheen Littlefeather—a public program focused on celebration, healing, and reflection. The event was followed by an intimate private reception.

The museum livestreamed An Evening with Sacheen Littlefeather on its YouTube channel. The video will be available online until Friday, September 23; a trimmed version of the event will then be shared to the museum’s channel.

In addition, as part of the Academy’s Oral History Projects, the museum has published a nearly four-hour visual history with Littlefeather, interviewed by Academy Museum Director and President Jacqueline Stewart. The mission of the Academy Oral History Projects is to collect, record, preserve, and provide access to personal spoken accounts that provide insight into the history and evolution of the art, science, and craft of motion pictures. The recording arm of the program—the Visual History Program—has been operating since 2012 and has so far filmed 234 filmmaker interviews (about 940 hours of original content) and preserved another 1,200 historical interviews from other sources.

Following these powerful performances, Academy of Motion Picture Arts and Sciences CEO Bill Kramer took the stage to underscore the Academy and Academy Museum’s prioritization of representation, belonging, inclusion, and access. Visitors then watched a 60-second clip of Littlefeather’s speech from the 1973 Academy Awards® during which—at Marlon Brando’s request—she respectfully declined his Best Actor award in protest of the treatment of Native Americans in the entertainment industry. This clip is currently on view in the museum’s Academy Awards History gallery.

Academy member, producer, and co-chair of the Academy’s Indigenous Alliance Bird Runningwater (Cheyenne/Mescalero Apache/NM) then took the stage with Sacheen Littlefeather (Apachi/Yaqui/AZ) for a 20-minute conversation that reflected on Littlefeather’s experiences the last fifty years.

The White Mountain Apache Crown Dancers from Arizona with Joe Tohonnie got everyone on their feet with a dynamic dance to close out the program.

About the Academy Museum
The Academy Museum is the largest museum in the United States devoted to the arts, sciences, and artists of moviemaking. The museum advances the understanding, celebration, and preservation of cinema through inclusive and accessible exhibitions, screenings, programs, initiatives, and collections. Designed by Pritzker Prize-winning architect Renzo Piano, the museum’s campus contains the restored and revitalized historic Saban Building—formerly known as the May Company building (1939)—and a soaring spherical addition. Together, these buildings contain 50,000 square feet of exhibition spaces, two state-of-the-art theaters, the Shirley Temple Education Studio, and beautiful public spaces that are free and open to the public. These include: The Walt Disney Company Piazza and the Sidney Poitier Grand Lobby, which houses the Spielberg Family Gallery, Academy Museum Store, and Fanny’s restaurant and café. The Academy Museum exhibition galleries are open seven days a week, with hours Sunday through Thursday from 10am to 6pm and Friday and Saturday from 10am to 8pm.