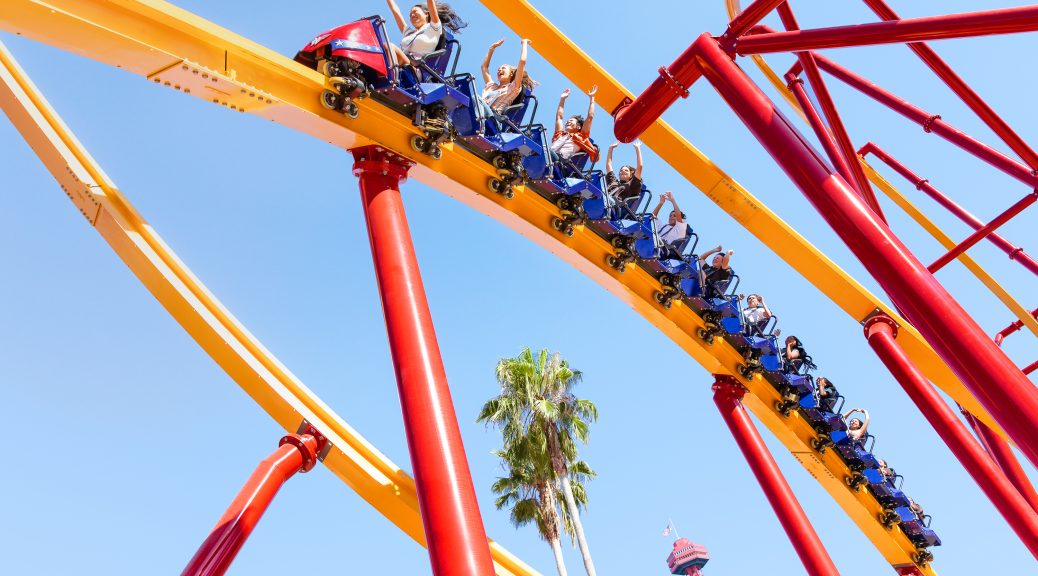 Six Flags Magic Mountain, the “Thrill Capital of the World,” in partnership with Warner Bros. Themed Entertainment, makes history with the debut of WONDER WOMAN™ Flight of Courage, the world’s tallest, longest single-rail coaster, and a never-before-achieved milestone as the park’s record 20th coaster—the most at any theme park on the planet. Unlike any other ride experience at Six Flags Magic Mountain, WONDER WOMAN Flight of Courage propels riders single file on a nearly two-minute journey up a towering 13-story, 87-degree first drop and soaring at speeds up to 58 miles-per-hour over
3,300 feet of track.

Inspired by the power of WONDER WOMAN herself, the record-breaking coaster features five intense elements, including three dramatic inversions, through a series of dives, banks, rolls and turns. WONDER WOMAN Flight of Courage opened to the public on July 16, 2022.

“Wonder Woman Flight of Courage is unlike any other coaster at our park and delivers a unique and thrilling experience for our guests. Today we’re making history with the debut of our record 20th coaster, the most at any theme park in the world.” – Six Flags Magic Mountain Park President Don McCoy

WONDER WOMAN Flight of Courage is located in the newly themed DC UNIVERSE™ area of the park, an immersive, six-acre DC inspired land featuring an all-new themed portal entrance. The reimagined area is also home to the popular BATMAN™ The Ride and the renamed TEEN TITANS™ Turbo Spin. A new retail store, uniquely designed for guests as they exit both WONDER WOMAN Flight of Courage and BATMAN The Ride, features exclusive ride merchandise for both coasters, as well as other DC-branded merchandise.

“Today we’re making history with the debut of our record 20th coaster, the most at any theme
park in the world. We are extremely proud to be the first theme park to accomplish this
unprecedented and amazing feat as we add yet another world-class coaster to our iconic
lineup,” said Six Flags Magic Mountain Park President Don McCoy. “Wonder Woman Flight of
Courage is unlike any other coaster at our park and delivers a unique and thrilling experience
for our guests. The expansion of DC Universe, one of our park’s most popular themed areas,
highlights our dedication to creating new, immersive experiences and rides for thrill seekers of
all ages,” he added.

Key features of WONDER WOMAN Flight of Courage include:
• Four sleek trains of 12 passengers each sitting one rider per row along the monorail
track;
• 3,300 feet of single-rail, I-beam track;
• Tension-building ascent up a towering, 131-foot lift hill;
• Reaching speeds up to 58 mph;
• Intense elements including a steep, 87-degree first drop and overbanked cutback;
• Three dramatic inversions including a 180-degree stall, raven dive and zero-gravity roll; and
• A themed entrance portal and queue inspired by the hidden island of Themyscira.
Riders must meet the 48-inch height requirement. For more information about WONDER
WOMAN Flight of Courage, please visit www.sixflags.com/magicmountain.
About Six Flags Magic Mountain
Six Flags Magic Mountain, known as the Thrill Capital of the World, is home to more than 100
rides, shows, and attractions, including world-class roller coasters like Twisted Colossus, Tatsu,
Full Throttle, and X2.
Like us on Facebook @sixflagsmagicmountain
Follow us on TikTok @sfmagicmountain
Follow us on Instagram @sixflagsmagicmountain
Follow us on Twitter @sfmagicmountain
About Six Flags Entertainment Corporation
Six Flags Entertainment Corporation is the world’s largest regional theme park company and the largest operator of waterparks in North America, with 27 parks across the United States, Mexico, and Canada. For 60 years, Six Flags has entertained millions of families with worldclass coasters, themed rides, thrilling waterparks and unique attractions. Six Flags is committed to creating an inclusive environment that fully embraces the diversity of our team members and guests. For more information, visit www.sixflags.com.

About DC
DC creates iconic characters, enduring stories, and immersive experiences that inspire and entertain audiences of every generation around the world and is one of the world’s largest publishers of comics and graphic novels. As a creative division, DC is charged with strategically integrating its stories and characters across film, television, consumer products, home entertainment, interactive games, DC UNIVERSE INFINITE digital subscription service and community engagement portal. For more information visit dccomics.com and dcuniverseinfinite.com.