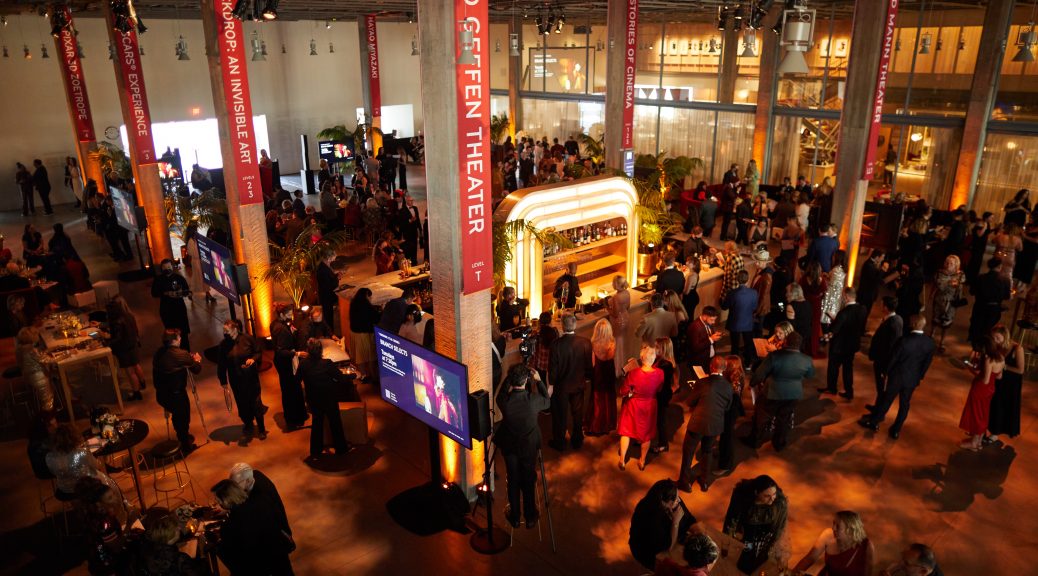 Los Angeles, Calif. – On March 27, 2022, on the occasion of the 94th Academy Awards®, the Academy Museum of Motion Pictures hosted the inaugural Oscars Night at the Museum. More than 1,000 guests at the sold-out event experienced some of the excitement of the awards pre-show as they walked the red carpet in their most creative and glamorous black-tie looks.

Throughout the evening attendees captured the evening in photo booths featuring a 360° slow motion camera and a photo mosaic wall; enjoyed sets from DJs Mamabear and Lady C courtesy of dublab; explored the museum’s 50,000 square feet of galleries; accepted their own award in The Oscars® Experience in the East West Bank Gallery; and had an opportunity to shop for exclusive merchandise at the Academy Museum Store.

The energy of the live broadcast was telecast in the museum’s state of the art David Geffen Theater, hosted by TCM’s Dave Karger with emcees, Chris and Vanessa Spencer, Tom Lenk, D’Lo, and Jesus Trejo performing during commercial breaks. Guests enjoyed food from Wolfgang Puck Catering in the Sidney Poitier Grand Lobby in addition to offerings from local food vendors Vurger Guyz and Thai-Mex Cocina.

Las Fotos Project, a non-profit organization that seeks to elevate the voices of teenage girls and gender-expansive youth from communities of color through photography and mentoring, helped document the festivities.

The Academy Museum is the largest museum in the United States devoted to the arts, sciences, and artists of moviemaking. The museum advances the understanding, celebration, and preservation of cinema through inclusive and accessible exhibitions, screenings, programs, initiatives, and collections. Designed by Pritzker Prize-winning architect Renzo Piano, the museum’s campus contains the restored and revitalized historic Saban Building—formerly known as the May Company building (1939)—and a soaring spherical addition.

Together, these buildings contain 50,000 square feet of exhibition spaces, two state-of-the-art theaters, the Shirley Temple Education Studio, and beautiful public spaces that are free and open to the public. These include: The Walt Disney Company Piazza and the Sidney Poitier Grand Lobby, which houses the Spielberg Family Gallery, Academy Museum Store, and Fanny’s restaurant and café. The Academy Museum exhibition galleries are open seven days a week, with hours Sunday through Thursday from 10am to 6pm and Friday and Saturday from 10am to 8pm.