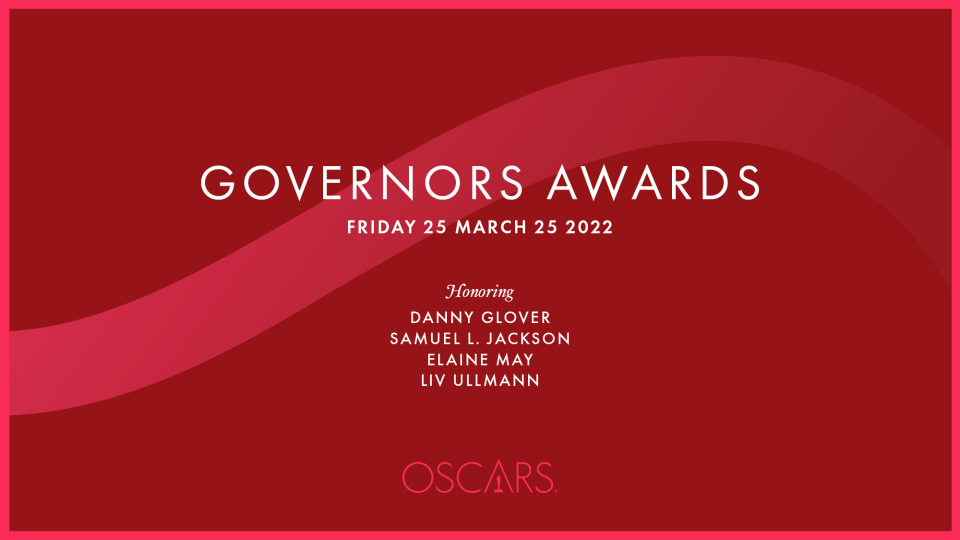 DANNY GLOVER, SAMUEL L. JACKSON, ELAINE MAY AND LIV ULLMANN TO BE
HONORED WITH OSCARS®

Los Angeles, Calif. – The Academy of Motion Picture Arts and Sciences today announced the 12th Governors Awards will be held on Friday, March 25, 2022, at the Ray Dolby Ballroom at Hollywood & Highland® in Hollywood.  Honorary Awards will be presented to Samuel L. Jackson, Elaine May and Liv Ullmann, and the Jean Hersholt Humanitarian Award will be presented to Danny Glover.  Originally slated for January 15, 2022, the rescheduled event, produced by Jennifer Fox, will be scaled down in size.

The Honorary Award, an Oscar statuette, is given “to honor extraordinary distinction in lifetime achievement, exceptional contributions to the state of motion picture arts and sciences, or for outstanding service to the Academy.”

The Jean Hersholt Humanitarian Award, also an Oscar statuette, is given “to an individual in the motion picture arts and sciences whose humanitarian efforts have brought credit to the industry.”

The 12th Governors Awards is proudly supported by Rolex, the Exclusive Watch of the Academy of Motion Picture Arts and Sciences.