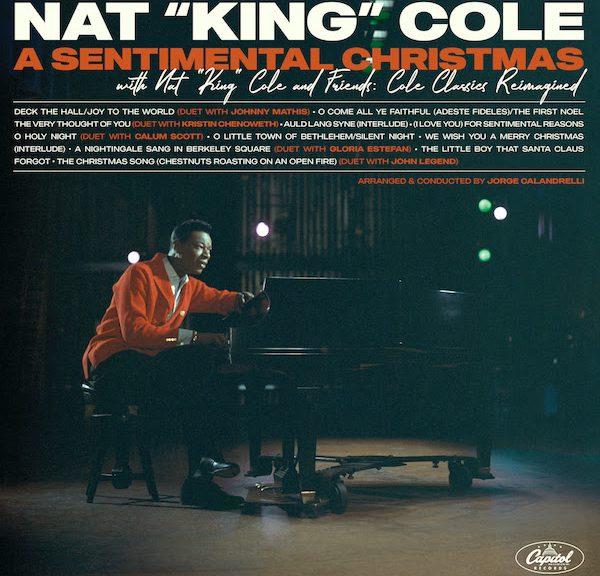 A unique holiday album that weaves Nat’s distinctive, beautifully restored vocals with new arrangements and contemporary artists, the collection features virtual duets of holiday classics with Kristin Chenoweth, Gloria Estefan, John Legend, Johnny Mathis, and Calum Scott; a full tracklist is below. Based on archival photos of Nat, watch/share hand-drawn visualizers for each of the album’s tracks here.

The album is available on CD, vinyl, and all digital formats with an exclusive Rudolph Red vinyl available at Walmart; listen/buy here.

Born in Montgomery, Alabama, in 1919, Nathaniel Adams Coles was one of four sons of the First Baptist Church’s pastor Edward Coles. Nat’s mother, Perlina Coles, a choir director at the church, taught him piano at four. In 1921, the family moved to Chicago, seeking a better life in the prospering towns of the north. Nat became obsessed with the inescapable sound of Chicago jazz. Mastering the piano at a young age was central to his artistic development. Cole developed his style as a teenager adding in his own flair for the blues. His unique playing style and sultry baritone voice were fully formed when he worked his way from Chicago to Los Angeles.

Signed to Capitol Records in 1943, Cole released his initial album as the lead vocalist of “The King Cole Trio” in 1945, at the dawn of the LP format, and topped Billboard’s inaugural album chart. In his brief 20-year career, he recorded more than 150 singles that reached Billboard’s pop, R&B, and country charts and sold more than 50 million records. His phenomenal success led to Capitol’s iconic round building on Vine Street in Hollywood to be known as “The House That Nat Built.” Cole’s impressive catalog has since garnered six platinum and two gold album awards, with six-times RIAA- platinum-certified “The Christmas Song” initially released in September 1964.

In addition to his recognition as a musical trailblazer, Cole is also recognized as a champion for civil rights. The revolutionary American singer’s impact continues across the world’s cultural and political landscape. In 1946, he broadcasted a 15-minute national radio program, “King Cole Trio Time,” the first of its kind to be hosted by an African American musician. In 1956, he became the first African American to host his own national network television show, NBC’s “The Nat King Cole Show.” In addition to his warm and welcoming stage personality, Cole was a featured actor in films including China Gate and the Oscar-winning Cat Ballou.

TRACKLIST
1. Deck the Hall/Joy to the World (duet with Johnny Mathis)

About Capitol RecordsFor more than 75 years, Capitol Records has played a significant role in popular culture as one of the world’s premiere music companies and the first label to be based on the west coast of the United States. Formed in 1942, by renowned songwriters Johnny Mercer and Buddy DeSylva, along with music retailer Glenn Wallichs, Capitol has been home to some of the world’s most important and acclaimed recording artists, including The Beatles, The Beach Boys, Nat King Cole, Peggy Lee, Linda Ronstadt, Frank Sinatra, Tina Turner, and countless others. In the 21st Century, Capitol continues its prominence in helping to define popular music and culture with a diverse array of artists that includes Beck, Halsey, Queen Naija, Katy Perry, and Sam Smith, to name only several. Capitol Records is the flagship label of Capitol Music Group, a subsidiary of Universal Music Group (UMG), and is headquartered in the world-famous Capitol Tower in Hollywood, California.

About Nat King ColeOne of the most identifiable and memorable voices of the 20th century, Nat King Cole recorded nearly 40 albums and over 100 singles that reached Billboard’s pop, R&B, and country charts and sold more than 50 million copies. As the first African American to host a radio show and a national television show, NBC’s “The Nat King Cole Show,” he was a civil rights pioneer. Cole appeared in several films, including  St. Louis Blues and Cat Ballou. He won the Grammy®Award for Best Performance for “Midnight Flyer” and was honored with a Special Achievement Award from the Golden Globes. He was posthumously awarded the Lifetime Achievement Award from NARAS and inducted into the Rock and Roll Hall of Fame. 2019 marked the 100th anniversary of the birth of Nat King Cole, born March 17, 1919.