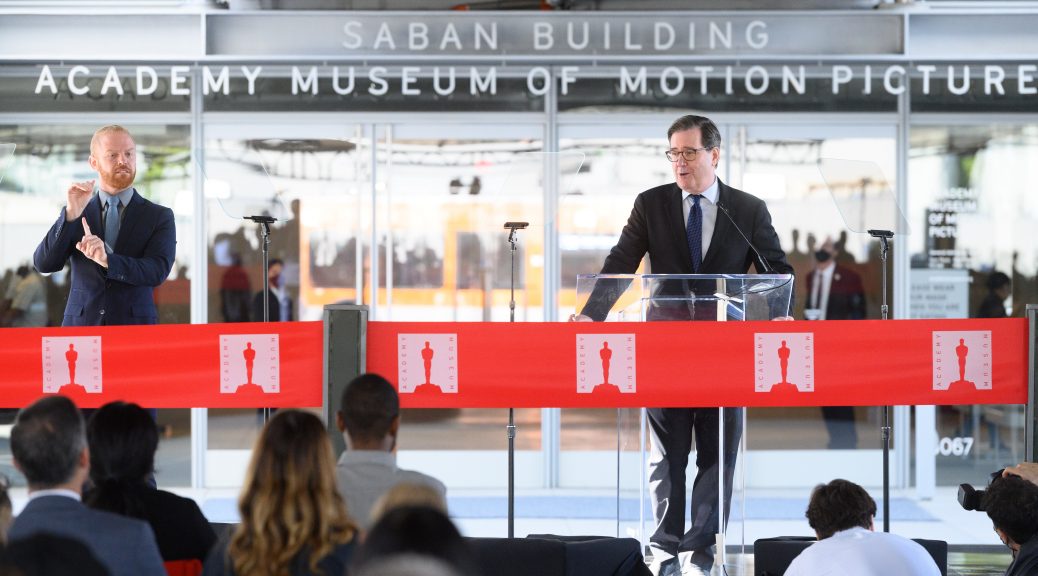 Los Angeles to Light its Landmarks in Gold to Celebrate the Academy Museum’s Opening.

Los Angeles, Calif. – September 30, 2021—Officials representing the Academy Museum, the Academy of Motion Picture Arts and Sciences, the City and County of Los Angeles, the State of California, and the Tongva community gathered this morning before an invited audience of cultural and philanthropic leaders to dedicate the new Academy Museum of Motion Pictures and declare it open to the public.

“Los Angeles is the movie capital of the world, and we are thrilled to be unveiling the Academy Museum in the heart of the city,” Bill Kramer said. “Our museum celebrates the art and artists of moviemaking, and we are honored to be greeted by these signals of recognition from other landmarks across LA.”

“Los Angeles is the movie capital of the world, and we are thrilled to be unveiling the Academy Museum in the heart of the city,” Bill Kramer said. “Our museum celebrates the art and artists of moviemaking, and we are honored to be greeted by these signals of recognition from other landmarks across LA. We are deeply grateful to Mayor Garcetti for leading this initiative.”

In his remarks, Mayor Garcetti announced that landmark buildings will be bathed at night in gold illumination to welcome the Academy Museum to Los Angeles. The Ferris Wheel at Pacific Park on the Santa Monica Pier, Union Station Los Angeles, the U.S. Bank Tower, the GRAMMY Museum®, and the Petersen Automotive Museum will be lit in gold.

“As the creative capital of the world, we’re so proud in Los Angeles of our legacy of moviemaking,” said Mayor Eric Garcetti. “The Academy Museum is an incredible addition to our cultural landscape. By honoring the films that have sparked our imaginations and even changed our lives, it will inspire people for generations to come.”

Originally constructed for the May Company department store, the Academy Museum’s 1939 Streamline Moderne Saban Building was designed by Albert C. Martin, Sr., who was also the architect for the 1928 Art Deco Los Angeles City Hall.

Councilmember Nithya Raman said, “The Academy Museum feels like a bit of a parallel to the dream that draws so many to Los Angeles. And as a Councilmember who has the extraordinary privilege of representing this District, I am truly amazed by what has been accomplished here by the Academy, its donors, and its partners, both private and public. This is proof we can still do BIG things in Los Angeles.”

Colleen Bell said, “Now we have a triumphant new museum that encompasses the movies as an industry, a society, an artistic source of meaning and identity. The Academy Museum is a destination where visitors not only from across our state, but from around the world, will find inspiration and connection with each other.”

Dawn Hudson said, “Practically the first thing the founders of the Academy did, after they created the Oscars in 1929, was to propose building a movie museum in Los Angeles. The Oscars® honor individual achievements in filmmaking, year by year, one night a year. But an Academy Museum would honor the art of film itself, 365 days a year, for all time. That was what the founders dared to imagine nearly a century ago. This is the museum of filmmakers everywhere, made for audiences everywhere, now and into the future.”

David Rubin said, “I’m proud to say that the Academy of Motion Picture Arts and Sciences is among the institutions that have changed things for the better. We’ve done it in the Academy Film Archive, and in the Margaret Herrick Library. We’ve done it through our educational programs, fellowships, grants, and awards. And now we’ve done it by giving Los Angeles, and the world, this spectacular new home for the movies. We’ve made our dream a reality—and we want to welcome absolutely everyone to share in its treasures—and delight in the celebration of motion pictures.”

Effie T. Brown said, “This is a great day for Los Angeles. A great day for movie lovers. And especially great for the film community. We always knew our community is broader in outlook, rich in experience, and varied in culture—more so than the standard histories have told us. You can see, hear, and feel this at the Academy Museum. Here is a museum, with the entire weight of the Academy behind it, that embraces and champions the diversity of artists who have always been present in the film industry then and now.”

Ted Sarandos said, “When I moved to Los Angeles, I thought that I would find a museum that would honor the art of film and the role that movies play in our lives. But that place didn’t exist. Somehow there was no film center, here in the global center of film. Now we have the Academy Museum, which is opening to the public for the first time today but already feels as if it’s been here forever. That shows you, in itself, how much this museum has been needed.”

About the Academy Museum of Motion Pictures
The Academy Museum is the largest museum in the United States devoted to the arts, sciences, and artists of moviemaking. The museum advances the understanding, celebration, and preservation of cinema through inclusive and accessible exhibitions, screenings, programs, initiatives, and collections. Designed by Pritzker Prize-winning architect Renzo Piano, the museum’s campus contains the restored and revitalized historic Saban Building—formerly known as the May Company building (1939)—and a soaring spherical addition. Together, these buildings contain 50,000 square feet of exhibition spaces, two state-of-the-art theaters, an education studio, restaurant, retail store, and beautiful public spaces.