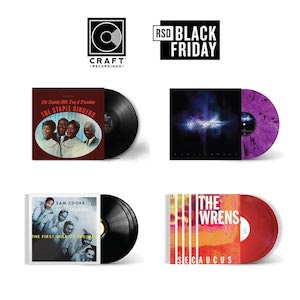 CRAFT RECORDINGS ANNOUNCES EXCLUSIVE RELEASES FROM EVANESCENCE, SAM COOKEAND MORE FOR RECORD STORE DAY’S 2021 BLACK FRIDAY EVENTThis year’s line-up includes a brand-new Sam Cooke compilation, offering a look at his formative years with the Soul Stirrers and his early recordings as a solo artistLimited-edition reissues include titles from Evanescence, the Staple Singers and the WrensClick here to locate your nearest participating retailer.

Los Angeles, Calif. —Craft Recordings is proud to unveil an exclusive line-up of titles for Record Store Day’s 2021 Black Friday event, taking place on November 26th in independent record stores around the world. Releases include a brand-new Sam Cooke compilation, The First Mile of the Way, which highlights the singer’s formative years—including his gospel recordings with the Soul Stirrers and his early forays into pop music. Craft is also offering several special vinyl reissues, including a 10th-anniversary pressing of Evanescence’s best-selling self-titled album; the first wide vinyl release of the Wrens’ acclaimed sophomore album, Secaucus; and a 180-gram vinyl edition of the Staple Singers’ Christmas record, The Twenty-Fifth Day of December.

Find details on each title below. For a full list of participating Record Store Day retailers, visit recordstoreday.com.

Before Sam Cooke was an internationally known soul star, he was a rising voice in gospel music, whose smooth-as-silk vocals were perfected in the churches of Chicago. In 1950, the 19-year-old singer got his big break when he joined the Soul Stirrers. The celebrated gospel act, which formed in the 1920s, had recently signed to Specialty Records and was looking for a new lead singer. Over the next six years, the enigmatic Cooke honed his skills as a performer and songwriter, bringing the Soul Stirrers broader appeal and helping them score their first hit single, “Jesus Gave Me Water.”

By the middle of the decade, however, Cooke was eager to expand his repertoire and pursue a solo career in secular music. Releasing several of his early singles under Specialty—including the No. 1 R&B hit “I’ll Come Running Back to You”—Cooke found immediate success. He would eventually score a whopping 29 Top 40 hits on the Billboard Hot 100 and 20 hits on the R&B Top Ten before his untimely death in 1964.

The First Mile of the Way explores these formative years, offering fans the chance to witness Cooke’s development as an artist. The brand-new compilation, which coincides with Specialty Records’ 75th anniversary, features 25 tracks—spanning Cooke’s years with the Soul Stirrers through his early pop-leaning singles as a solo artist, included here in their original versions without overdubs. As a special bonus, the album includes live recordings by the Soul Stirrers at the legendary 1955 gospel concert at Los Angeles’ Shrine Auditorium—all of which make their vinyl debut. Housed in a triple-gatefold jacket, the three-disc, 10-inch vinyl collection also features a replica promo photo, flyers and other ephemera from the era.

The First Mile of the Way tracklist:

Side B1. Nearer to Thee (Live) – The Soul Stirrers

Evanescence rose to massive, global fame in the early 2000s, dominating the charts with their unique blend of heavy riffs and atmospheric, symphonic underpinnings. But following the release of Fallen (2003) and The Open Door (2006), the band took a much-needed break from the spotlight to recharge. Five years later, they returned with their highly anticipated self-titled album, Evanescence. The time away was particularly fruitful for co-founder and frontwoman Amy Lee, who told Kerrang! that the synonymous title was “about falling back in love with this thing, with Evanescence,” adding that “it just felt like this is who we are.” Produced by Nick Raskulinecz (Foo Fighters, Alice in Chains, Coheed and Cambria), Evanescence also marked a creative turning point for the band, whose previous albums were written primarily by Lee. Instead, the group took a collaborative approach to their third record, while weaving in fresh sonic textures. Released in the fall of 2011, Evanescence was embraced by fans and critics alike—debuting at No. 1 on the Billboard 200; landing in the Top 5 in the UK, Canada, Australia, and across Europe; and earning high marks from the likes of Entertainment Weekly, AllMusic and Kerrang!, who hailed Evanescence as the band’s “best album to date.” The LP also spawned several hit singles, including “What You Want,” “My Heart Is Broken” and “Lost in Paradise.” A decade later, the powerful and introspective album remains a fan favorite.  Evanescence are currently getting ready to kick off one of the biggest arena tours of the year with Halestorm. Tickets and limited VIP packages are on sale now at evanescence.com. Full dates listed below.  To celebrate the 10th anniversary of Evanescence, this special, collectible edition will be pressed on Purple-Smoke vinyl and limited to 8,000 copies worldwide. Evanescence tracklist:Side A

The Wrens – Secaucus (2-LP, Cherry Red Vinyl) Following the release of their 1994 debut, Silver, New Jersey four-piece the Wrens established themselves as one of the most promising indie rock acts of the era, drawing comparisons to acts like XTC, the Cure and the Pixies. Their 1996 follow-up, Secaucus, was equally as well-received. The 19-track album (named for their hometown) was filled with reflective songwriting, catchy hooks and sharp, guitar-driven melodies—reflecting a confident band that was settling into their sound. Praised by Pitchfork as “a near-perfect power-pop record,” Secaucus featured such favorites as “Built in Girls,” “Surprise, Honeycomb” and “Won’t Get Too Far.” Despite their rising popularity, however, the Wrens fell prey to the whims of an ever-changing music industry. Never officially breaking up, the band members (guitarist/vocalist Charles Bissell, guitarist Greg Whelan, bassist/vocalist Kevin Whelan and drummer Jerry MacDonnell) pursued full-time careers in other fields after the release of Secaucus, reemerging seven years later to surprise fans with a new album, Meadowlands. With a tongue-in-cheek tagline of “Keeping Folks Waiting Since 1989,” the band continues to perform occasional shows and has even teased a fourth record. 25 years after the release of Secaucus, Craft Recordings celebrates this alt-rock cult classic with its first wide vinyl release. Pressed on Cherry Red vinyl, this special, 2-LP anniversary edition is housed in a gatefold jacket.  Secaucus tracklist: Disc 1:Side A 1. Yellow Number Three 2. Built in Girls 3. Surprise, Honeycomb 4. Rest Your Head 5. Won’t Get Too Far  Side B1. Joneses Rule of Sport 2. Dance the Midwest 3. Still Complaining 4. Hats off to Marriage, Baby 5. Jane Fakes a Hug  Disc 2: Side 11. Counted on Sweetness 2. I’ve Made Enough Friends 3. Luxury 4. Indie 500  Side 21. Safe and Comfortable2. Destruction/Drawn 3. I Married Sonja 4. I’ll Mind You 5. It’s Not Getting Any Good About Craft RecordingsCraft Recordings is home to one of the largest and most prestigious collections of master recordings and compositions in the world. Its rich and storied repertoire includes legendary artists such as Joan Baez, Ray Charles, John Coltrane, Creedence Clearwater Revival, Miles Davis, Bill Evans, Vince Guaraldi, John Lee Hooker, Little Richard, Nine Inch Nails, Thelonious Monk, Otis Redding, R.E.M. and Traveling Wilburys, to name just a few. Renowned imprints with catalogs issued under the Craft banner include Concord, Fania, Fantasy, Fearless, Milestone, Musart, Nitro, Prestige, Riverside, Rounder, Specialty, Stax, Sugar Hill, Vanguard, Vee-Jay and Victory, among many others. Craft creates thoughtfully curated packages, with a meticulous devotion to quality and a commitment to preservation—ensuring that these recordings endure for new generations to discover. Craft Recordings is the catalog label team for Concord Recorded Music. For more info, visit CraftRecordings.com and follow on Facebook, Twitter, Instagram,YouTube, and Spotify.