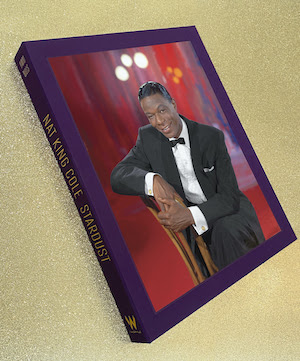 Los Angeles, Calif. – August 25, 2021 – In honor of his extraordinary legacy as a singer, jazz musician, style icon, and civil rights advocate, and in collaboration with King Cole Partners, LLC, David Wills of Nailor Wills Publishing will release Nat King Cole: Stardust, the first photography book ever published on the legendary entertainer.  Set for a November 1 worldwide release, the book is now available for pre-order here.

The individually numbered limited edition hardcover book housed in a clamshell case, features over 200 photographs—many never-before-seen or published and digitally restored from their original negatives and transparencies—as well as rare images from the Capitol Records photo archive.

With an introduction written by Johnny Mathis, a foreword by Cole’s daughters, Casey and Timolin, and contributions from Quincy Jones and Leslie Uggams, among others, the 272-page book also includes never-before-seen letters and telegrams from Presidents Kennedy, Eisenhower and Johnson, Jackie Kennedy and Martin Luther King, Jr provided by the Cole estate.

A limited edition 11×14 photographic print, selected from the Capitol Records photo archive and produced exclusively for this volume, is also included.  Signed to Capitol Records in 1943, Cole released his initial album with The King Cole Trio in 1945, at the dawn of the LP format, and topped Billboard’s inaugural album chart. In his brief 20-year career, he recorded more than 150 singles that reached Billboard’s pop, R&B, and country charts and sold more than 50 million records.

His phenomenal success led to Capitol’s iconic round building on Vine Street in Hollywood to be informally known as “The House That Nat Built.” Not only a musical trailblazer, Cole is also recognized for his contributions to the struggle for civil rights and racial equity. In 1946, Cole broadcast a 15-minute national radio program, “King Cole Trio Time,” the first of its kind to be hosted by an African American musician. In 1956, he became the first African American to host his own national network television show, NBC’s “Nat King Cole Show.”

By David Wills Foreword by Casey and Timolin

About Nat King ColeOne of the most identifiable and memorable voices of the 20th century, Nat King Cole recorded nearly 40 albums and over 100 singles that reached Billboard’s pop, R&B, and country charts and sold more than 50 million copies. As the first African American to host a radio show and a national television show, NBC’s “The Nat King Cole Show,” he was a civil rights pioneer. Cole appeared in several films, including  St. Louis Bluesand Cat Ballou. He won the Grammy® Award for Best Performance for “Midnight Flyer” and was honored with a Special Achievement Award from the Golden Globes. He was posthumously awarded the Lifetime Achievement Award from NARAS and inducted into the Rock and Roll Hall of Fame.