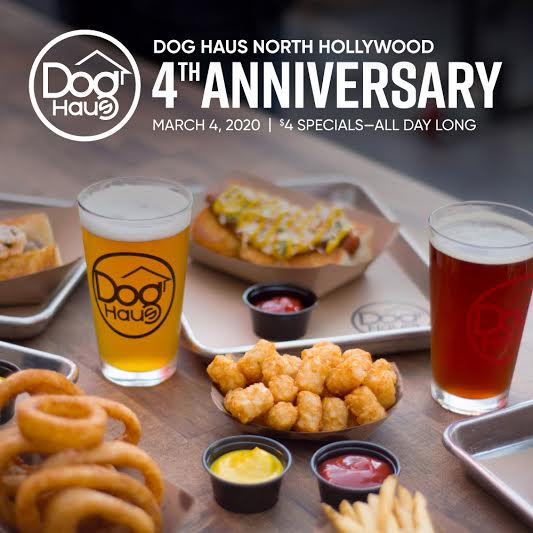 Acclaimed craft casual gourmet hot dog, sausage and burger concept to offer a Haus Dog and pint of beer for only $4 each all day long.

To commemorate the occasion, Dog Haus NoHo will be serving guests their choice of seven chef-driven Haus Dog creations, which feature all beef handcrafted dogs and premium toppings – plus a pint of local craft beer – for just $4 each.

Dog Haus is designed to elevate that nostalgic childhood experience of enjoying a hot dog with the contemporary aesthetic of its modern industrial space. After ordering at the counter, diners can gather around communal-style tables outfitted with bar stools or take a seat at one of the cozier reclaimed wood and steel tables that span the perimeter of the 2,253-square-foot restaurant.

DISCLAIMER:     Offer valid for one $4 Haus Dog and one $4 Pints. No additions or substitutions. Other menu items do not qualify, including plant-based substitutions. Promotion valid Wednesday, 3/4/20 for dine in orders at Dog Haus North Hollywood; not available for order via the Dog Haus app. Dine-in only. May not be combined with any other offer, including Happy Hour. While supplies last.

Universal City, CA, February 20, 2020 – “The Secret Life of Pets: Off the Leash!” opens at Universal Studios Hollywood on March 27, bringing an astounding 64 animated figures to this all-new tech-savvy ride based on Illumination’s blockbuster The Secret Life of Pets films, which answer the question, “What are your pets really doing when you’re not at home?”

The entertaining new ride features original voice talent from The Secret Life of Pets films who will unleash their animal instincts to reprise their roles for this exciting theme park attraction. The talent and their alter egos include Patton Oswalt as Max, Kevin Hart as Snowball, Eric Stonestreet as Duke, Jenny Slate as Gidget, Tiffany Haddish as Daisy, Lake Bell as Chloe, Dana Carvey as Pops, Chris Renaud as Norman, Hannibal Buress as Buddy, Bobby Moynihan as Mel, and Jessica DiCicco as Princess.

“The Secret Life of Pets: Off the Leash!” is a heartfelt experience that transforms guests into stray puppies as they journey to become loved and adopted. After all, adoption day is the ultimate rite of passage for every domesticated animal and, as such, the perfect theme of this engaging new ride as these beloved puppies find their forever homes.

Combining 64 technologically-advanced animated figures, “The Secret Life of Pets:  Off the Leash!” invites guests to meet some of their favorite characters from the movies, who themselves have transformed into dimensional beings. From blinking eyes to eye and eyebrow movements, from head tilts to head nods, from moving mouths to smiles, from ear curls to lip curls, from full torso twists to physically walking, the depth of mobility and function programmed within each of these loveable characters creates an experience unlike any other theme park ride.

With the addition of hyper-realistic media and projection mapping, this impressive new ride is designed to fully immerse guests in a dynamic New York City landscape. Seated within ride vehicles that resemble cardboard boxes—reminiscent of where Katie first finds her beloved Max as a puppy—guests will travel along a track towards the Pet Adoption event and the ultimate happy ending: forever homes.

The ride will feature state-of-the-art optical enhanced gesture-tracking technology, which helps to identify each guest as a unique stray puppy for the duration of the ride. With an option to be transformed into one of 15 stray puppies, guests will enjoy a unique experience each time they ride “The Secret Life of Pets: Off the Leash!”

Virtual Line technology is another component of the experience, designed to help guests maximize their leisure time at the theme park. Guests can access Virtual Line via the official Universal Studios Hollywood app, available for free in the App Store and on Google Play or they can visit the Virtual Line kiosk located in the New York City subway station, situated adjacent to the ride. Both provide guests with options to experience the ride based on the next available times and will be available to guests within the theme park as needed.

Virtual Line complements the ride’s non-traditional queue which invites guests to explore the area at their leisure and freely roam the ride’s corridors—reminiscent of Katie’s NYC apartment building—explore dachshund Buddy’s apartment, Snowball owner Molly’s living room as well as Max and Duke’s apartment, until they reach the ride’s boarding station.

“The Secret Life of Pets: Off the Leash!” will be located on Pets Place, previously referred to as Baker Street, and adjacent to the popular “Despicable Me Minion Mayhem” and “Super Silly Fun Land” attractions. With the installation of store front facades, Pets Place will capture the charm of a busy New York City street, including an iconic NYC subway station, which serves as the in-park location for the Virtual Line.

With so much to see and do at Universal Studios Hollywood, an Annual Pass invites guests to experience the theme park’s thrill and adventure over and over again. Visit www.UniversalStudiosHollywood.com for more details and to save up to $60 on an Annual Pass when purchased online. Offer valid through April 23, 2020. Restrictions apply.

In addition to 2-Day tickets currently available, fans can now purchase 1-Day General Admission adult tickets starting at $99 at www.PeacockLive.com. Plus, fans who purchase their tickets before Sunday, February 16 are eligible for pre-mailed custom credentials, offering an expedited arrival experience at the event. Peacock Live! ticketholders will receive general admission entry to Universal Studios Hollywood, including exclusive after-hours park after dark access, offering a great value for the ultimate NBCUniversal insider weekend. Plus, Peacock Live! guests will be among the first to experience the spectacular new ride inspired by Illumination’s “The Secret Life of Pets.”

“This Is Us” – Join stars of NBC’s mega-hit drama including Milo Ventimiglia, Justin Hartley and creator/executive producer Dan Fogelman for a look inside the award-winning show. The panel will be moderated by “Access Hollywood” co-host Kit Hoover.

“Saved by the Bell” – Get an exclusive sneak peek at the upcoming Peacock reboot of the beloved sitcom, followed by a discussion with stars/executive producers Mario Lopez and Elizabeth Berkley and showrunner/executive producer Tracey Wigfield.

“Good Girls” – Stars of the popular NBC comedy-infused drama Christina Hendricks, Retta, Mae Whitman, along with series creator/executive producer Jenna Bans and executive producer Bill Krebs, discuss what to expect as they head into the rest of season 3.

“Halloween Horror Nights” – Get insight from the global teams behind the world’s most successful Halloween event, and how they collaborate with filmmakers to bring iconic horror films to life as interactive, dimensional haunted houses and mazes.

2020 Tokyo Olympics – NBC Olympics primetime host Mike Tirico leads a conversation with Olympic icons Mary Lou Retton, Jackie Joyner-Kersee and Rowdy Gaines, all of whom were medalists at the 1984 Los Angeles Olympics. Plus, fans can get a preview of athletes to watch in Tokyo this summer.

“The Making of a Theme Park Attraction” – How does a global blockbuster film franchise like “Jurassic World” become a mega-hit theme park thrill ride? Guests will have a chance to hear first-hand from the creative minds at Universal theme parks around the globe responsible for bringing favorite films from the silver screen to groundbreaking, next-generation thrill rides.

“A Little Late with Lilly Singh” – A meet and greet opportunity with the host of NBC’s newest late-night talk show and social media sensation Lilly Singh.

“American Ninja Warrior” – Hosts Matt Iseman, Akbar Gbajabiamila and Zuri Hall of the hit NBC competition show will be on hand to provide color commentary on Peacock Live! guests who compete on the full-sized obstacles seen on the show. Plus, get tips and tricks and take a photo with some of the all-time top Ninjas.

“Days of our Lives” – Join the iconic stars of NBC’s record-breaking daytime drama for a special meet and greet opportunity, complete with a cast lunch.

“World of Dance” – Emmy winner and judge of NBC’s dance competition series Derek Hough will teach fans his best moves in an instructive dance class, and answer questions during an insightful fan Q&A.

Plus, additional talent appearances throughout the weekend include “TODAY” weather anchor and co-host of the “3rd Hour of TODAY” Al Roker, “Late Night with Seth Meyers” writer and comedian Amber Ruffin and more. *Schedule and appearances are subject to change.

These new events join previously announced programming, such as a special preview screening of DreamWorks Animation’s “Trolls World Tour” before it hits theaters, the largest vehicle collection ever assembled from the “Fast & Furious” franchise, an archival exhibit with props and costumes from beloved films and shows, and much more. For all previously announced programming and more information, visit www.PeacockLive.com.

Peacock Live! is a first-ever fan festival showcasing the best of NBCUniversal’s past, present and future. Taking place March 28-29, 2020 on the legendary Universal Studios backlot, Peacock Live! will give fans insider access to the latest and greatest film, television, sports, lifestyle and theme park experiences only from NBCUniversal.

NBCUniversal is one of the world’s leading media and entertainment companies in the development, production, and marketing of entertainment, news and information to a global audience. 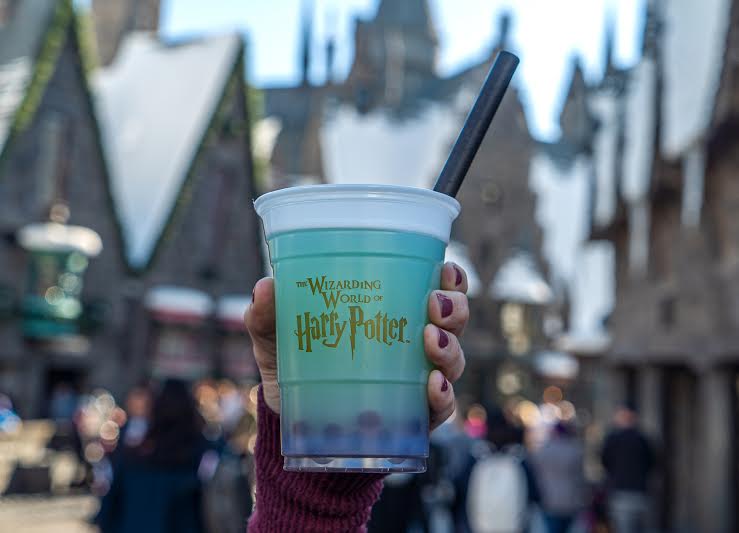